There are still a lot of reference books out there that I still want to buy. And I have been fortunate to buy one that I have been chasing for over 10 years. This is Alan Clark’s Encyclopedia of Comic Artists, Writers and Editors. This is a well researched book which features short biographies of such luminaries that are of interest to myself and other fans of British comics. 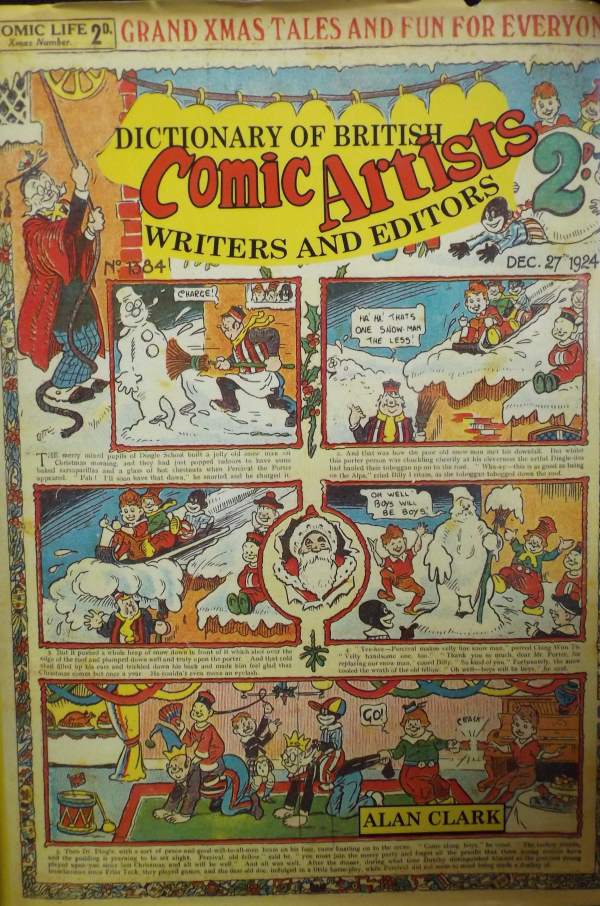 The reason for taking 10 years to chase down this book has been simple economics. The book originally sold for £40 from The British Library in 1997. However, by the time I was aware of the existence of this book in 2005, the internet had exploded into being and was becoming an integral part of our lives. But in those eight short years, the value of the book had rocketed to over £100. In fact, the first copy that I saw was being sold in Canada for the equivalent of £110 and was being used by a learning institute as required reading as part of their course. So I kept looking and hoping for the price to drop to something reasonable.

This year, I had gone looking for another Alan Clark book and I saw this featured for less than the cover price. When I saw that I knew I had to buy it. But there are still copies being sold for three figures sums! However, some are being sold for much more reasonable sums.

The strength of this book is in its’ coverage of what I consider to be the Fleetway Funnies. I know that this term is hopelessly inaccurate but I lump anything by Amalagmated Press, Odhams, Hulton Press and any other company that was not D C Thomson into the category of Fleetway.

In my defence,  I grew up in the 1970s in the county of Angus where less than 15% of all periodicals sold were not published by D C Thomson, so there were only the two companies that I was aware of that published comics. As I have gotten older (please note that does not necessarily mean the same as grown up!), I have become aware of what went before to create Fleetway. And I am also aware of what has taken the place of Fleetway, but my mind still thinks of them as Fleetway, even though I have emailed that rather nice Matt Smith at Rebellion a time or two.

I also like the fact that this book strengthens my knowledge of the artists, writers and editors that worked in the comics business in the early part of the 20th century. What makes me smile is that I was looking at the Silent Three in my post about girls’ annuals and here we have a nice bio about Evelyn Flinders, the artist for that strip. 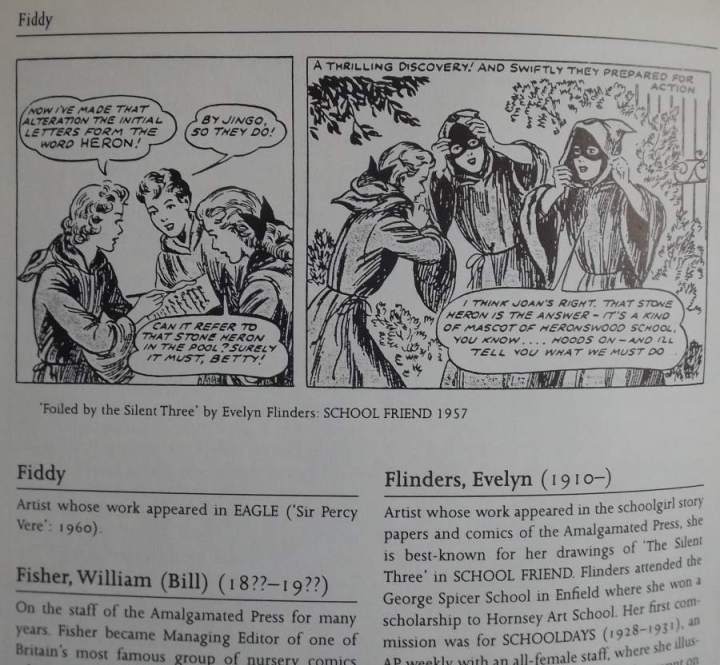 My problem is that as I have learned more about comics, the more this book has become a bit of a curate’s egg for me. A good example is that I had just completed an article about Jim Watson, so when I got the book, the first name I turned to was Jim Watson.  Imagine my surprise and chagrin when I found that Jim was not mentioned. The next name that I turned to was C D Bagnall. Bagnall was an artist who featured quite often in The Victor. He drew Feuding Finnegan and Cecil: The Stone Age Scrapper amongst others. And again, I found that this was someone that had not been mentioned. However, it was quite nice to find the Mike Western self-portrait. 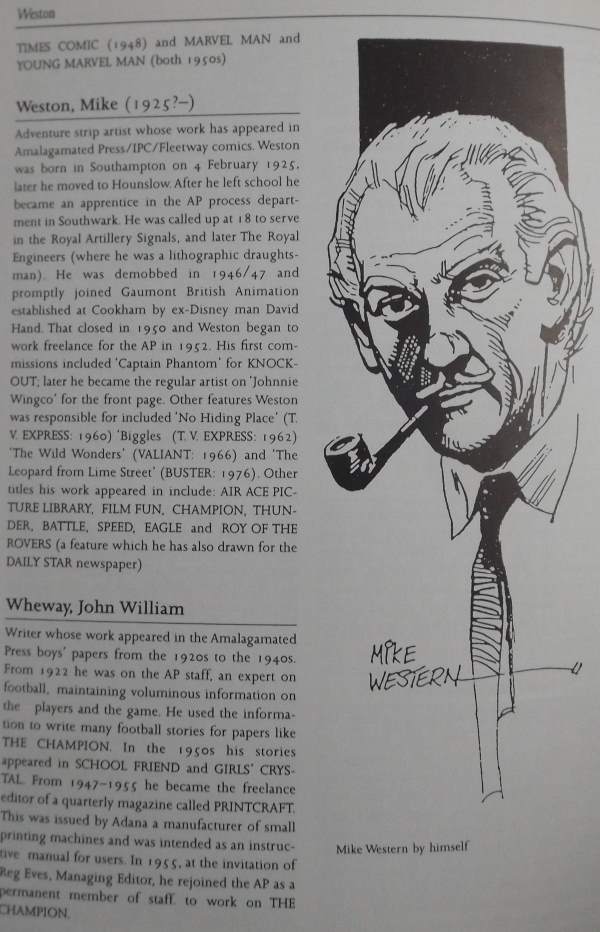 Two of the other names that I put in gave me a result. And they were Ted Kearon who was responsible for not only Robot Archie, but also Morgyn The Mighty. The other name was Harry Farrugia, who still remains in my top twenty of artists despite the fact that we lost him in 1970. 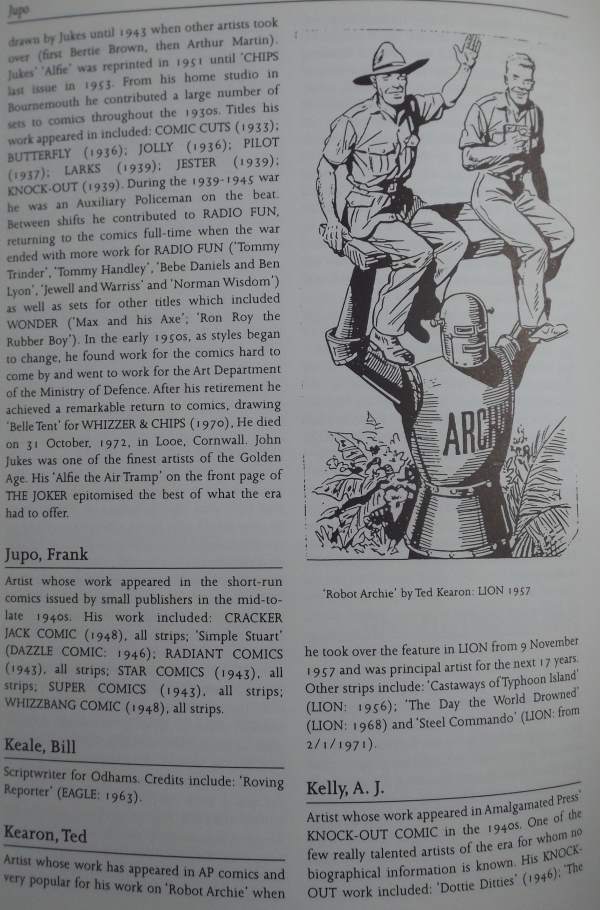 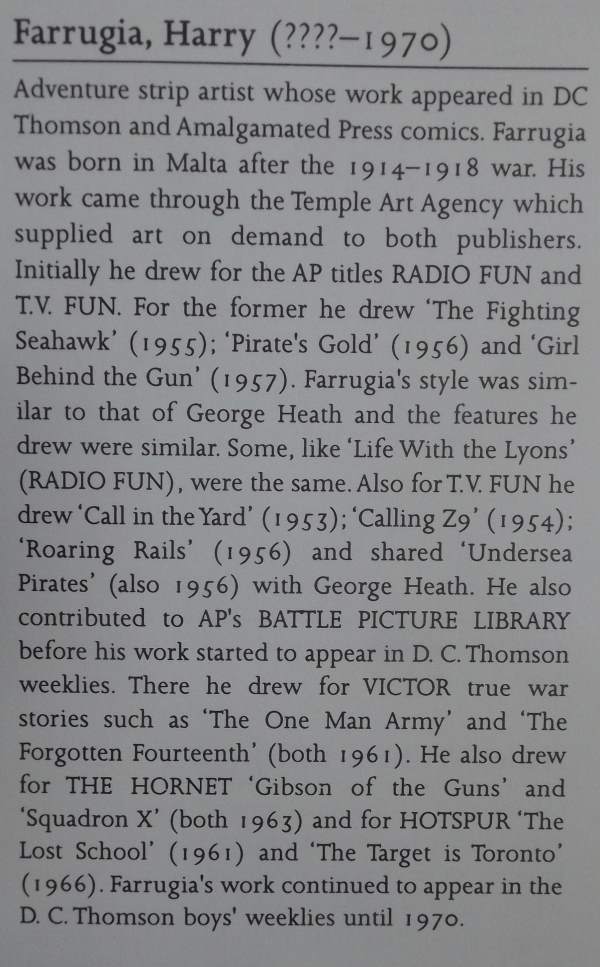 I dislike putting out anything negative about anything comic related, so I turned my dissatisfaction about those that were not mentioned in this reference book into a memory game. The game was to list any British contributor to UK comics that was not mentioned in this book. Each contributor had to be British, have something published before 1990 and I was not allowed to go on the internet to add to the list of names that I could come up with.

When I got to over 30 names, I knew that my friends and wife were right in that I know far too much about comics to stay silent about them anymore. I hope that I have encouraged a few fans to buy this book while they can get it at a reasonable price. And if you want to know my list of names, please leave a comment below.

4 thoughts on “What was that called again? Part 3”