I really need to find out who the editor was for 1970s picture paper Wizard as his taste was impeccable. He brought several up and coming artists to the attention of the world and three of them are now considered major influences by the current artists breaking through.

I have mentioned that this comic featured the debut of Carlos Ezquerra in the action papers with He Was Only A Private Soldier and the next article I was looking at was featuring Dave Gibbons’ work in Wizard and Hotspur as I am going to see him at the 2015 Dundee Literary Festival but while I have been thinking about that, I found another diamond and that looks to be Brian Bolland’s only work for D C Thomson. This is a Simon Gaunt story, which was the D C Thomson boys papers’ equivalent of Future Shocks or Vector 13 in 2000AD. I have emailed Brian Bolland and he has confirmed that he did draw a 2 page story for D C Thomson. And if it is not The Box, I am going to cry. 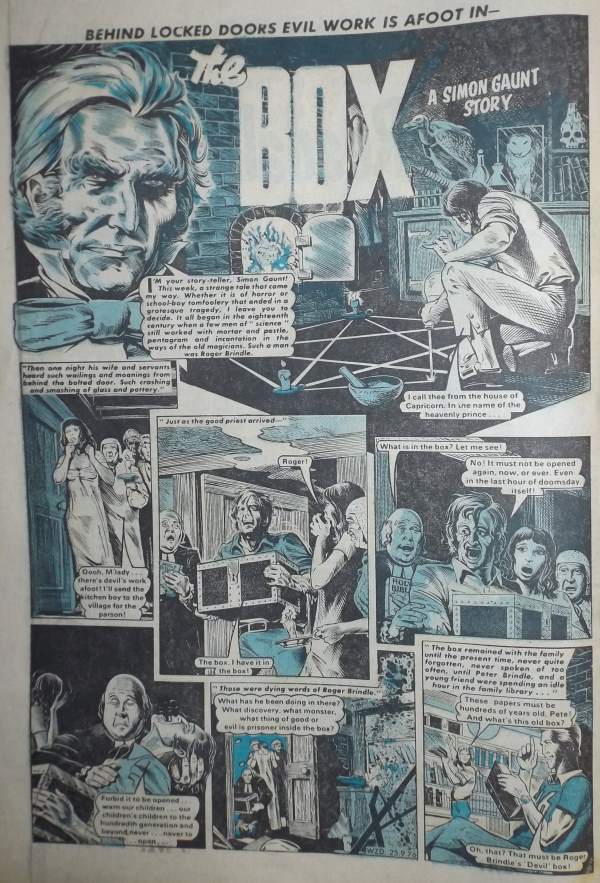 Now while many people may not be excited about this find, in which case I cry heretic, I think it is important as it is one of the earliest mainstream commissions that Brian undertook. To me, it screams out that it is Brian’s work as the face of Peter Brindle when he opens the box has future echoes of Giants Aren’t Gentlemen from 2000AD and hints of Ragged Robin from The Invisibles covers. And the wife of Roger Brindle has a resemblance to a certain female judge from 2000AD. Not to mention shades of Mordred from Camelot 3000 in the malicious glee of Peter Brindle and his friend.

The frame I have chosen for the header is due to how much it reminds me of the Father Earth story, another favourite of mine. There is also something about the stance of Brian’s characters that always acts as a “tell” for me, but I am still trying to analyse that one.

If the pictures are not up to scratch, I do apologise, but as the nights are drawing in, it is difficult to get pictures in natural light. I only hope that you all enjoy the finding of this early piece of Brian’s work as much as I have.