I never made it to Glasgow Comic Con so I spent the day doing some research with the comics I have and I can confirm that there is definitely a linkage between Sabre and Club Libraries. How can I say this without seeing a single piece of evidence on the Companies House website? I’ll say it in one word.  Reprints.

British comic publishers are notorious for being very protective of their brands and their Intellectual Properties so no company gets to reprint someone else’s material unless there is a ton of negotiation beforehand or they have bought the rights to it.  To gain a good understanding of how complex a maze it is, read this article over on Down The Tubes off what a maze it is.  I even referred to how messed up it was on one of my latest articles about the inspiration for some comic characters being public figures.

As a result of having this knowledge, I know that no British comic company will print the work of another unless they have a clear license to print it or they own it.  In fact the only British companies that I can name that have reprinted work which they did not originally publish are Titan, Rebellion, Hatchette and Eagle Comics when they have reprinted the back catalogue of 2000AD, Battle and the odd historical piece like the two Jeff Hawke books but they added original Bolland covers then I had to have them.  However I digress…

So when I found this cover out in the wild, I thought it was indexed incorrectly and it should be issue 41 of the Sabre Library, then the penny dropped that this was a Club Library. 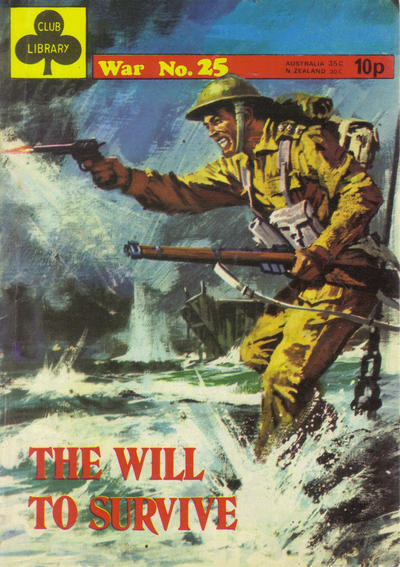 Just so we know exactly why I was thrown, here is the cover I thought it was.

Even down to the font size of the title, this is a carbon copy of the earlier published issue to such an extent, Med Publishing who owned Club must have either purchased Sabre in total or been a new incarnation of the same company.  The third option is that a company had accepted the assets of Sabre in lieu of debts owed as was done with Micron in the mid-1960s.  You pays your money and you put down your bets until the croupier calls “No more bets!”

If it wasn’t already funky enough, I checked more of the covers for Sabre War Libraries and found another six that matched font, title and cover of those published by Club Library.  There are probably more, but more than five pretty much confirms that Club Library was essentially a re-invention of the Sabre Library.

The next article sees us all saying Hail S.A.T.A.N.