As you may have guessed, my main hobby is comics (Get away, we would never have guessed!) but one of my many other interests is history.  When I found out about an event that combined both, involved Pat Mills, Ian Kennedy and Anya Morozova and located in the new V&A building in Dundee, it was a case of “Boss. I am booking the 20th September off!”

So the day dawned and off I set in my trusty Yaris to Dundee for the event.  I arrived a tad early and found that the weather was a tad brisk for my liking! I find that while brisk weather is grand to walk in, it’s not the weather to stand around waiting for the doors to open!

For those unaware of the event, here is the schedule in full.

There is no need for me to point out which bits I was looking forward to the most, but the bits I enjoyed surprised me.

As John McShane and I settled into our seats, we were welcomed by Dr Billy Kenefick who explained what the Great War Dundee project was about. This segued smoothly to Fiona Sinclair inviting us to look at the Hidden Histories book that had been placed on every seat. The Hidden Histories book looked at how the Great War had affected those who were born and bred Dundonians but also those who had adopted Dundee as their home and other associations with Dundee.

Our next piece was how the War to end all Wars had been depicted in comics that were of the time and how the war had been reinterpreted by the generations that were increasingly removed from the senseless slaughter of the Flower of Britain. We were treated to some beautiful Winsor McCay illustrations featuring anti-war propaganda prior to the USA being drawn into the conflict.  This talk obviously culminating in the Great War Dundee comic which can in no way ever be called a clarion call to go to war.

However, as educational and entertaining Calum and Chris were, it was Iain Donald that stole the kudos for that part of the day. Iain explained that where gaming goes, it has yet to lead as too often the ground it walks has been trail-blazed by cinema and comics.  However, he was able to recommend three of the best examples of the use of WWI in gaming and that is Valiant Hearts, Verdun and Battlefield 1.  While there is historical accuracy in each game, Battlefield 1 follow the U-571 movie’s approach to history!  However, I will recommend Valiant Hearts for one reason above all others and it is this Vimy Ridge Easter egg. By using columns of smoke, Ubisoft paid tribute to the fallen to create an ethereal model of the memorial that would one day stand there for all the fallen Canadians of the First World War.

It was unexpectedly personal for me as during the Q&A session, Iain was asked for examples of how gaming could be used to create a fitting tribute to the fallen.  He spoke of his work with PoppyScotland to create a virtual memorial and the example he used took me back 25 years in a second.  They had created a virtual model of the Poppy Scotland working centre where veterans work to assemble the poppies and how their work stations were personalised with mementos of their lives. The example he used was the white mug that had been a staple of all the UN deployments in the Former Republic of Yugoslavia.  You don’t stop HM Forces by fighting us. Take away the brew kits and the Forces would come to a grinding halt! 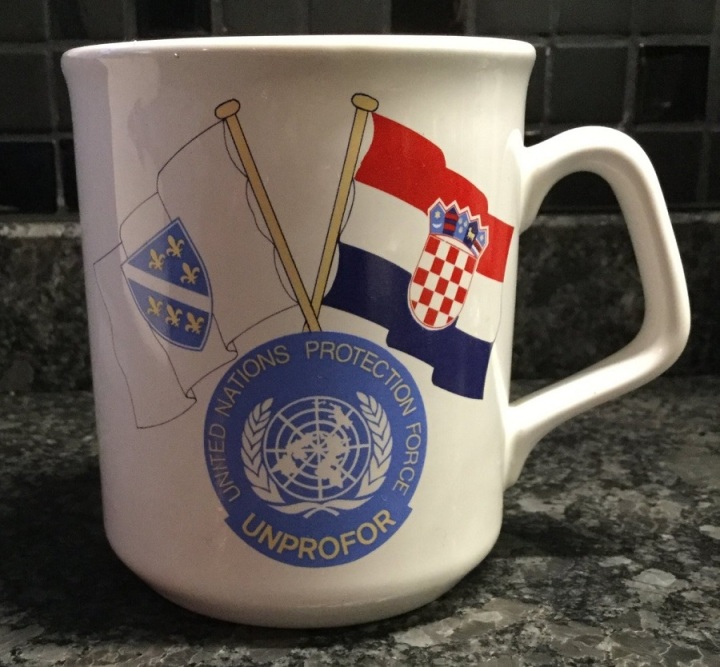 I am not ashamed that even now I am a little emotional about something I have not thought about for over 20 years.

Unfortunately all but Hailey were unable to attend the Commando workshop, but that did not deter Hailey.  With her engaging matter and a sneak preview of Commando 5 … ah that would be telling!  Hailey took us through the creative process of how each issue is put together from original pitch to finally being seen in print.  However, she and Calum made sure every time I went near the original art, it did not end up falling accidentally into my bag!

At this point, we adjourned for lunch and I was able to hang back and chat with the creatives. It was an absolute pleasure to spend time with Ian Kennedy, Calum, Gary, Hailey and Anya and to have Calum gently ribbing me about half inching the box of Commandos that had been brought down as printed examples.

I expected the round table discussion regarding the Great War Dundee project to be one that I would least enjoy.  I was genuinely pleased to be proven wrong.  Many subjects were brought up.  One was the arguments about the placement of the Dundee memorial on the Law Hill that was originally designed to incorporate Austrian lumber.  Needless to say that did not go down well with the veterans of the time.  We also found out the reason why it is only lit on the 25th September of each year so that Dundee can remember its’ darkest hour.

Another subject to be raised was the curious duality of Dundee having the highest rate of war resisters and volunteers to join the Forces before conscription was introduced.  One story that highlighted this duality perfectly was two funerals took place in Dundee on the same day.  One was a soldier who had fallen.  The other was a war resister.  As each cortege proceeded in opposite directions, they passed one another.  The column of war resisters raised their hats to acknowledge one who had died for his country.  The soldiers saluted the departed war resister who had fought for his community according to his principles.  It was acknowledged that Dundee was possibly the only city where this could have happened as in many other cities, war resisters were vilified and often publicly attacked while the authorities would not press charges on those beating up a ‘conchie’.  The similarities to certain events in today’s society can not be ignored. 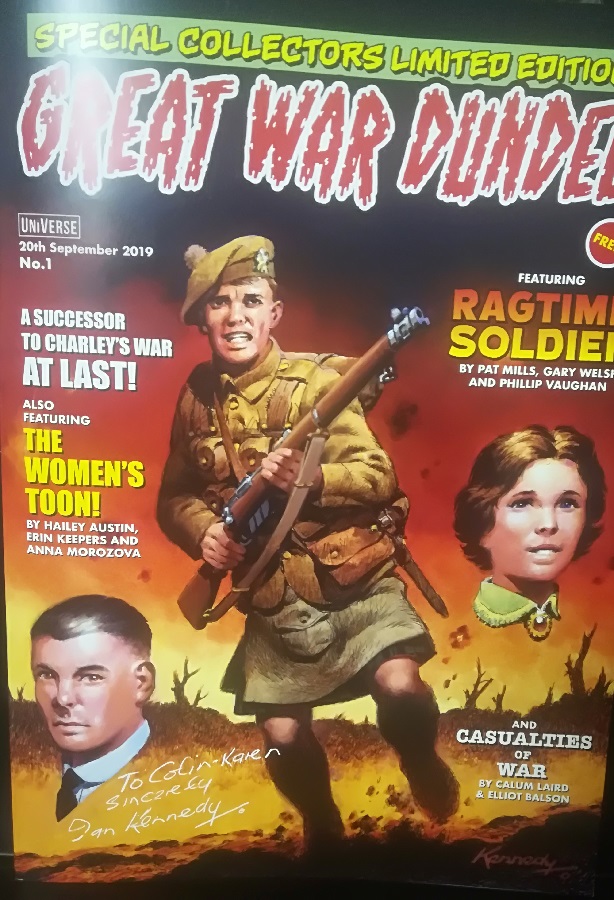 Now we had come to the bit which I had been looking forward to, but it felt like a natural progression to the day to have a comic launch. Once Chris and Phil had made sure we all had a copy, they gave the floor to Pat Mills.  One thing you will never be able to accuse Pat of is sitting on the fence!  With passion and eloquence, Pat explained that this story was a natural progression from Charley’s War and his rebuttal of all those who appear to see the mass slaughter of battles such as Verdun, Loos, Somme, Passchendale and all the others as some sort of victory rather than the factory of death by attrition that it was.  One fact that stunned me was that some of the German machine gunners stopped firing on the first day of the Battle of Loos as they could not continue to commit mass murder as the wall of corpses grew in front of their guns.

Well, that went dark quite quickly.  I am sure others will review the comic and speak of it in glowing terms. I have read Ragtime Soldier and it is classic Pat Mills. I had been saving Casualties of War and the Women’s Toon and  enjoyed reading them while Scott Joplin plays in the background.  For those not lucky enough to get to the launch, fear not for Comic Scene has done a deal to publish it as a pull out in October’s issue.

Hopefully, UniVerse gets the funding for issue 2 as I would love to see the continuation of Ragtime Soldier.  A shout out has got to go to Antony ‘Es’ Esmond of the Never Iron Anything blog for the 9 hour drive he did to be at the launch event. And yes before anyone asks, I got some squiggles at the signing event, not to mention a lovely addition to Project SKETCHBOOK from Gary Welsh.

I will finish off with one last recommendation and that is for the book Prolonging The Agony by Jimmy MacGregor and Gerry Docherty. Pat highly recommends this book for those who are feeling distinctly unsettled by the way the Great War is currently being seen as a great war.